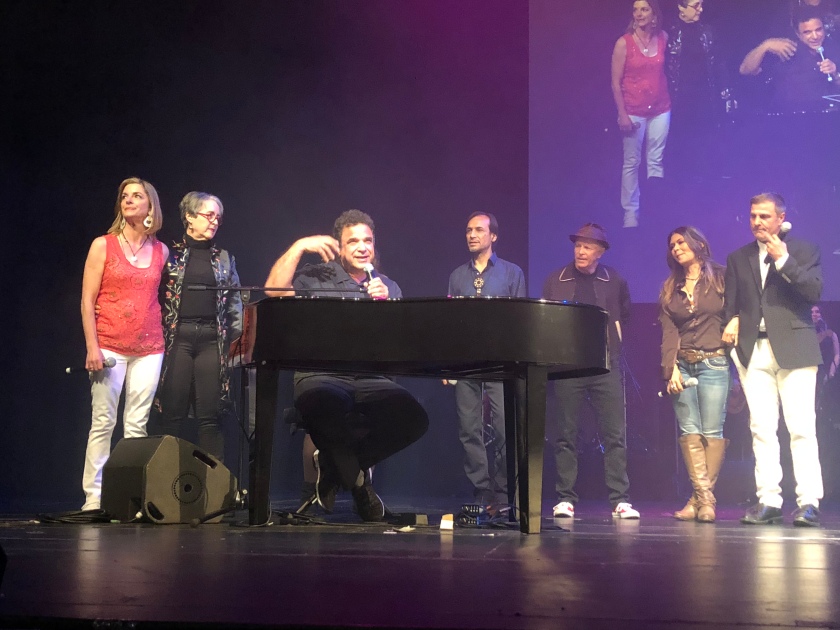 Have you ever had the feeling of regressing into your childhood or teenage years whilst listening to familiar lyrics of a song ? Or perhaps it’s a film that evokes memories from many years ago? For a matter of minutes or a couple of hours, you can feel detached from the world around you and have the sense of being physically a lot smaller without a care in the world! Well, there is rarely the chance to rediscover your inner child for a whole weekend but I’ve just come back from such an event. Oh. My. Word. I’ve just come back from the most incredible weekend in Liverpool where I and many other people not only connected with the music from the 1980s’ TV series Fame but even spent precious time with our childhood heroes!! Yes, Doris, Bruno, Danny, Montgomery, Dusty, Holly, Jesse and Nicole were all there! Aaaggghhh!!

In fact, my weekend was so packed with other things too like a stadium tour of Anfield, exploring the city of Liverpool and visiting Anthony Gormley’s art installation ‘Another Place’ that it’s going to take me at least another 3 blog entries to tell you everything I’ve been up to but, today, this is all about FAME! And goodness, this experience on my bucket list is one I’m going to be talking about for a very long time yet!

It’s been a whopping 35 years since the cast reunited here in the UK but thanks to an incredible lady called Sue and her fabulous team, we had 8 cast members here. Erica Gimpel who played Coco had to pull out a couple of weeks ago due to a filming opportunity (yay, go Erica!) but that meant that Loretta Chandler played a bigger role in the weekend which can only be good news for us with such a powerhouse voice!

So, what happened? Friday night was a meal with the cast at the beautiful Shankly Hotel in Liverpool. As some of the lucky Fame fans gathered, there was a fabulous anticipation of the cast about to walk in. And walk in they did to a rapturous applause! Yes, they really do exist and wow! I can’t stress enough how amazing they were. Really down to earth and personable. At my table for the different courses, we were lucky to have Loretta (Dusty), P.R. Paul (Montgomery), Jesse Borrego (who played Jesse) and Valerie Landsberg (Doris). Goodness, I found myself staring at them and I had to give myself a good talking to! Sarah, just let them eat in peace! They could not have been more charming with lots of stories to tell but also showing an interest in us. I was really excited to meet Cynthia Gibb who played Holly but also Karen Carpenter in The Karen Carpenter Story. I got to hug her! I was also SO keen to meet Lee Curreri who played Bruno as, being a fellow pianist and having played in theatres, I felt an affinity with him. What a kind, gentle guy. When they left after 3 conversation-packed hours, there was a surreal feeling of thinking ‘Did that actually happen?’ ‘Surely, that must have been a dream!’

Saturday was spent checking out the city and being lucky to see them at a rehearsal before a party hosted by the genuinely warm and entertaining Tom Urie. Some even came in fancy dress. Can you guess who these two are?!

Sunday started with a Q&A session with the cast although poor Lee had to rest his voice. It was great to see them interacting with each other and you could tell that there were some questions coming from the fans that provoked their own memories. You could tell with their faces lighting up and turning to each other with ‘Gosh, yes, do you remember……..?‘

And then Sunday night’s show. OH WOW!!!!!!!!!!!!!! I’ve met some really lovely people this weekend but I want to pay a particular thanks to Julia who is one of the nicest people I’ve ever met. Sitting next to each other at the concert, we were like hyped-up girls waiting for the curtains to open and when they did, we screamed! We cried. We screamed a little bit more! We and everyone else seemed to know every song! Isn’t it weird how you can go up the stairs as an adult and think ‘What did I come up to get?‘ whereas a Fame song gets played and the lyrics come flooding back! Joined on the stage by LMA and LIPA whose young people sang and danced brilliantly, the Fame cast members just shone on the stage and it was an incredible feeling to think that we’d already spent time with them! But the unthinkable happened! ‘Danny’ (Carlo Imperato) saw me in the front row and beckoned me up for a kiss. I mean, it’s terribly rude to refuse! I might have burst into tears and screamed a little bit! The whole show was fabulous but, apart from the encore when they sang the theme tune, they ended with the perfect song: Starmaker! What a night and to think that this was just one of two shows! What’s even more wonderful is that this has all been about raising money for a very important cause: Claire House which is a children’s hospice that makes SUCH a difference to many families! You can find out more about Claire House here

I really can’t believe that the weekend which has been in my diary for months is over but I’ll be at the next reunion…..wherever it is in the world!

So, in the new few blogs, find out about the rest of my time in Liverpool but I’ll also share with you my upcoming road trip around the Scotland (including the Outer Hebrides) in June and my visits to the British Grand Prix and Chelsea Flower Show.