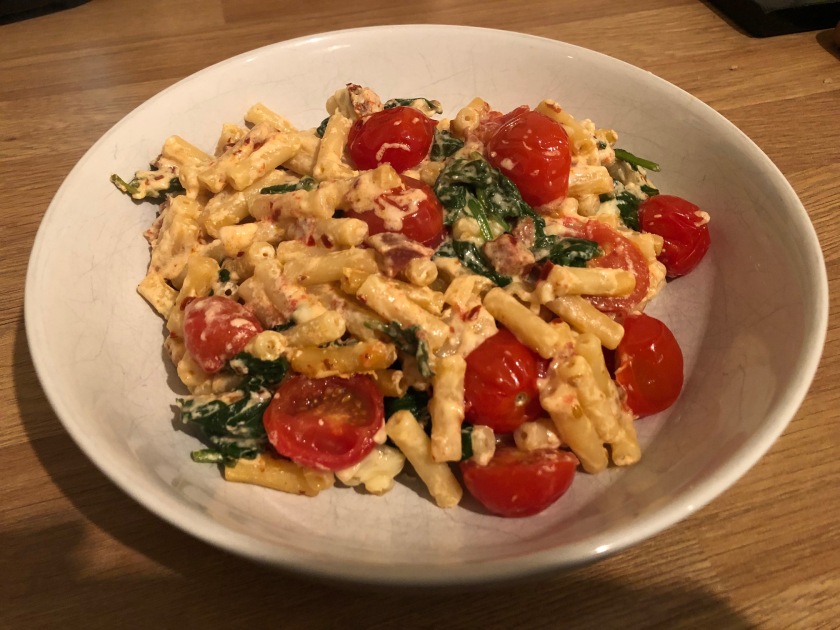 At the beginning of October, I have to admit that my culinary skills were embarrassingly awful. Despite being far too old to know better, the most adventurous thing I would consider cooking would be a jar of Dolmio pasta sauce chucked over some fusilli….and if I was going to be posh, I might add some grated cheddar! And if no-one else was at home, I was even worse. I’d throw something together in terms of a dry sandwich or eat something out of a tin. Yes, what could be better than eating cold rice pudding out of a tin….I mean, why waste a bowl?!

However, after a month of cooking, I can now say that I quite like cooking! Before, it was a matter of ‘can’t cook’ but a huge dollop of ‘won’t cook’ as my hubby is so unbelievably brilliant at opening up the kitchen cupboard doors and coming up with some masterpiece. However, it was time to embrace being an adult and get interested. So, where I did start?

To engage with this challenge on my bucket list to cook every day for a month, I did two important things. First, I went through our kitchen cupboard, the 2 freezers, etc. so that I could have a good sort out. I had to know what we had in the house. Second, I spent time perusing the shelves of supermarkets. In fact, I got really excited looking at interesting-looking bottles, sachets, etc. and it was as if a world was being revealed to me. This really helped me as I then got planning.

I thought I’d be bored witless standing at a hob but, with the radio blasting away, I loved it. And one of my favourite things to do was to do a steak-based meal in the slow cooker that hubby could help himself to when he got in from work as I’d already headed out for my volunteering role. My favourite recipe is macaroni cheese with chorizo, spinach and red chillies from the Very Lazy range. Here are the ingredients list and method from the Very Lazy website and the all important before and after photos!

It’s so easy to make and really scrumptious! And what I love most is that I’m continuing to cook despite it now being November! Soon, I’m going to head up to Borough Market in London with hubby and hopefully come back with some goodies to try out.

So, not quite the domestic goddess yet but I might be a little bit more adult right now 🙂