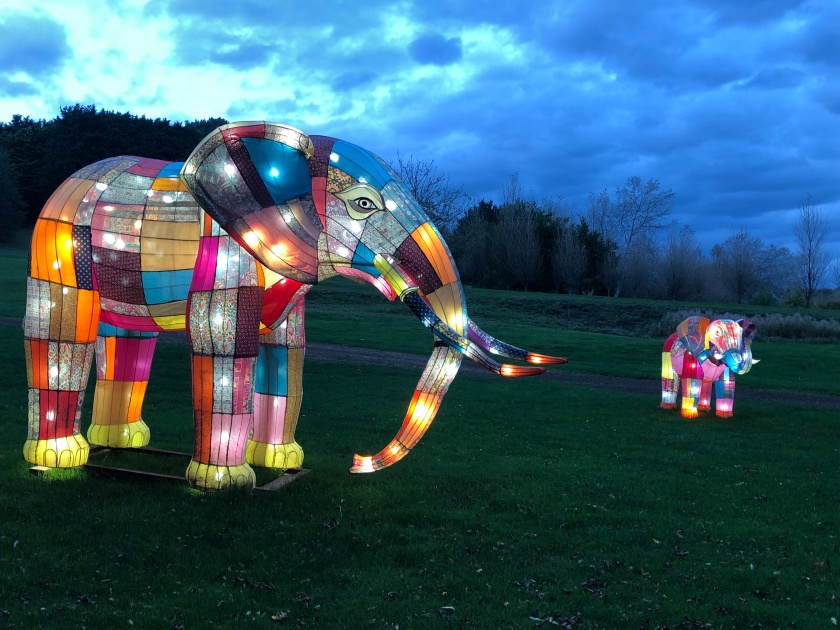 The other day, I posted on here about going to the Isle of Wight for a very quick trip and exploring the famous Needles on the Isle of Wight (which is a set of chalk rocks with a lighthouse). It was going to be fairly sunny and I thought I’d spend Sunday taking it leisurely, going on a boat trip, eating lunch outside, etc. and trying to convince myself that it’s still summer! Well, here in the UK, we’re known for our changeable weather here and the forecasts on Friday showed that it would instead be torrential rain all day. Not ideal weather for dangling from a chairlift at the Needles! As I wasn’t going to arrive on Saturday until dusk, I really didn’t want to just take the ferry, stay in a hotel room and then come home so it was time to think of Plan B!

A quick search on Google showed that there’s a festival on right now called ‘Festival of Lights – Inspired by Diwali‘ at Robin Hill which, apart from half-term, takes place 6-10pm every night! Perfect! So, after a 45 minute ferry ride from Portsmouth in Hampshire over to Fishbourne on the Isle of Wight, it was just a 10 minute drive to Robin Hill. Basically, the area is beautifully decorated with lanterns and lights, and there’s Indian food that you can eat. During half-term next week, there will even be Bollywood dancers providing entertainment. There are incredible outdoor play areas for children and teenagers including a neon jungle and huge trampolines/nets that appear to be suspended from trees. There’s even a holi powder arena where you get covered in different colours whilst standing under strobe lighting! As the name suggests in the title, it is on a hill and, having already walked several 1,000s steps in the morning, my recently recovered leg injury was making itself known but it was fantastic to be so mobile again. 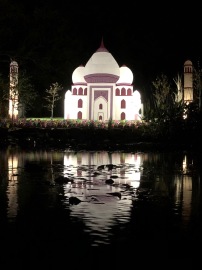 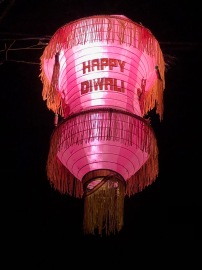 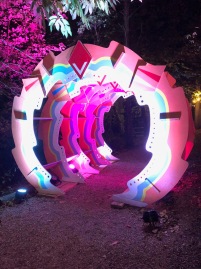 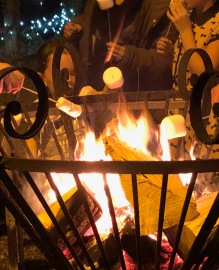 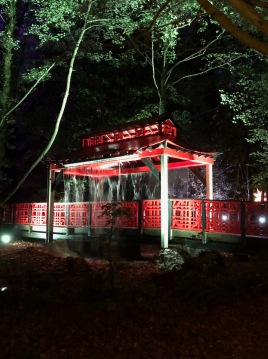 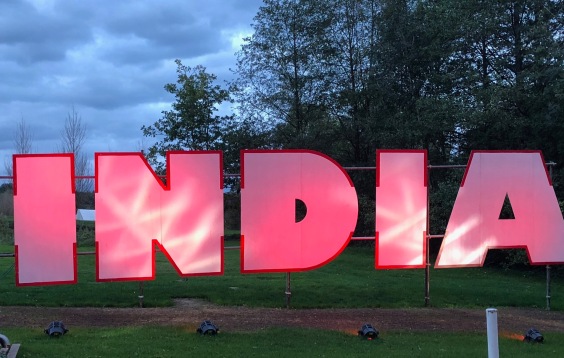 I also tried something for the first time….I had a henna tattoo! I really didn’t know what to expect other than it’d be nothing like an ink tattoo I had done many years ago. The lady doing it was really nice and she showed me lots of designs. I could have gone for a basic flower or something but I loved the thought of having flowers going the length of my index finger and onto my hand as the photo below shows. It actually felt warm but apparently that was the tingling sensation from the henna. And she then asked me a question to which the only answer is yes…. ‘Would you like glitter on the tattoo?‘!!! BUT…..I learnt something! It takes time for henna to dry and I quick smudged part of it. And what I wasn’t expecting was for the henna to sit on top of the skin rather than be more drawn on like a felt-tip pen. By the time I got back to the hotel, the henna was being easily flicked off my hand with the smallest knock and it felt very ‘grainy’ on the skin, if that makes sense. So, I guessed that by the time I woke up in the morning, I was very likely to be surrounded by black flecks everywhere and I decided to wash off the surface layer. Now, it’s left a very pretty orangey-brown design but I had no idea that it’s going to take so long to fade! Up to about a month until it’s completely gone!!!!! Oops!! 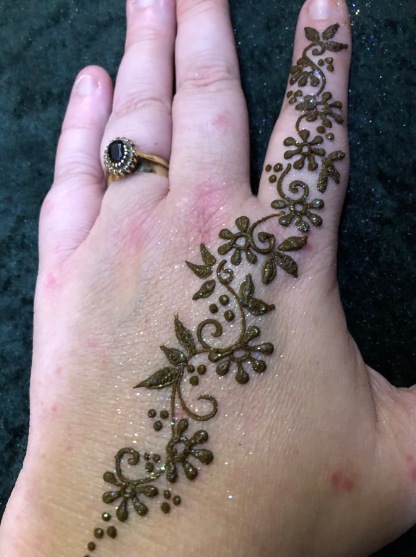 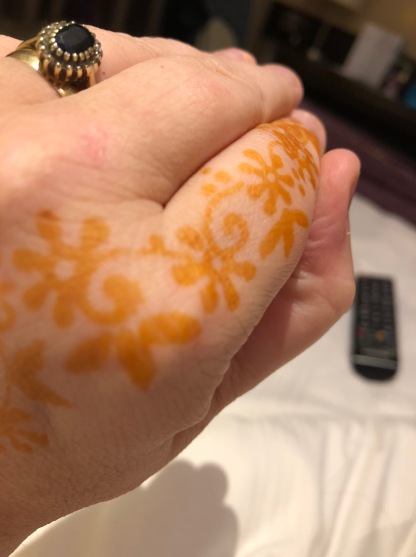 So, if you’re in the south of England and have children or grandchildren, it’s a fabulous place to go. The festival is on for until near the beginning of November. As a solo traveller, would I go back? Probably not but I beat sitting in a hotel room!

As I mentioned above, I’d been out in the morning too at RHS Wisley near Woking, Surrey which was really nice. After Kew Gardens in Richmond (well worth a trip!), it’s the next most visited, paid gardens in the UK with over a million visitors annually. It has a laboratory for research but lots of different gardens to explore, such as cottage, ornamental, etc. It was also a really good opportunity to play with my iPhone 8 Plus which has more interesting features on its camera, like ‘portrait’ where you can take a photo of something in focus and then blur the background, as seen in the photo below of the orange flower. 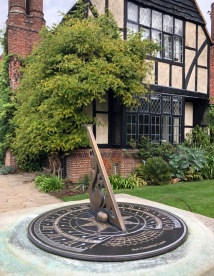 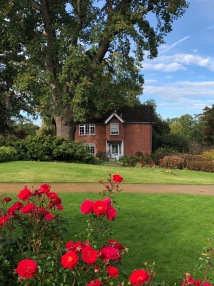 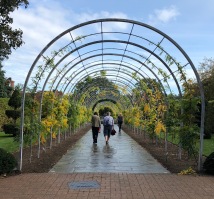 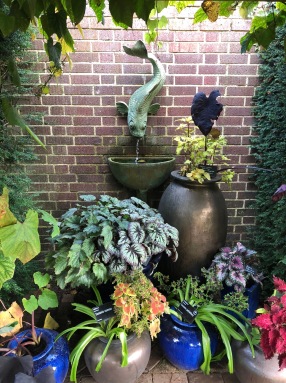 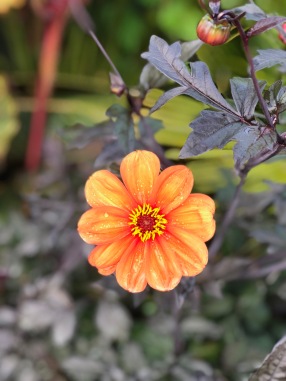 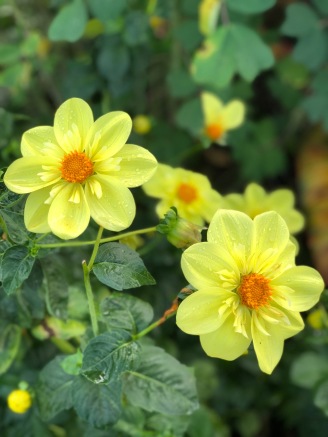 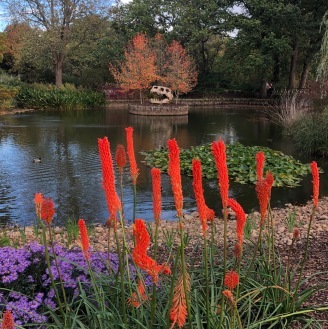 So, another busy weekend for me, especially as I also worked yesterday afternoon in between garden exploring and island hopping! And it now means that I’ve ticked another county on my quest to visit all of England’s 48 ceremonial counties since starting this bucket list. I bought this scratch map a few months ago and I love it as you scratch off each country, revealing lots of detail beneath. I’ve managed to tick off some counties in Wales and Scotland too but I’ve just 7 left in England: Cornwall, Worcestershire, Herefordshire, Cambridgeshire, Lincolnshire, Rutland and East Riding of Yorkshire. I sense another weekend break coming on! 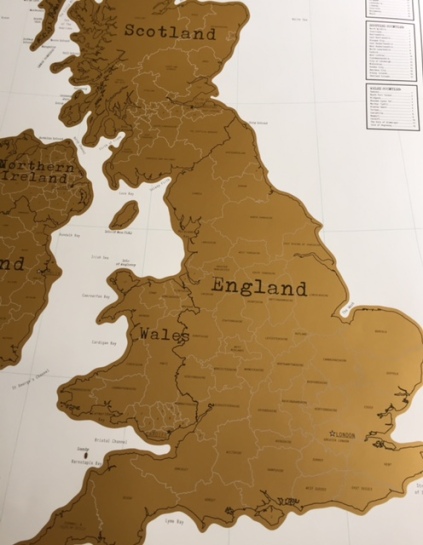 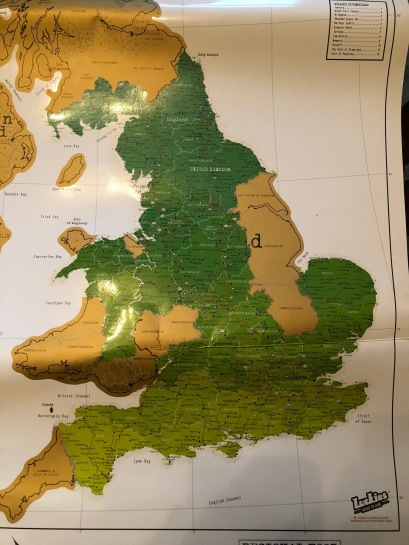 Hope you all have a lovely week xx