There’s little I like more than spending a quiet evening in with pjs on, curtains closed, phone switched off and and a British rom-com on. Sometimes, these films have story lines that you can identify with but often it’s that inevitable girl-meets-boy plot about will they or won’t they live happily ever after. So, after my recent action-packed journey to London where I found some filming locations for some of my favourite films, I thought I’d share a bit of information with you in case you too would like to check them out. Today’s film? Bridget Jones.

The film Bridget Jones features Renee Zellweger playing the title role but it actually started as a regular column in The Independent newspaper in 1995. Helen Fielding wrote about the trials and tribulations of a 30-something year old dealing with the complexities of life and love. And she has the most innocent charm and the ability to make some terrible faux pas that perhaps we’ve made too. From these columns, the novel was published by 1996 and then the film followed just a few years later in 2001. As I’m sure you’ll know, Renee is actually American but I was fooled by her received pronunciation which was as a result of working with acclaimed voice coach Barbara Berkery. You might not have heard of Barbara but she helped Lindsay Lohan sound very British in the remake of the Parent Trap and for a number of Gwyneth Paltrow films such as Sliding Doors. With first person narrative that gives insight into Bridget’s mind, the story begins:

It all began on New Years day, in my 32nd year of being single. Once again I found myself on my own and going to my mother’s annual turkey curry buffet. Every year she tries to fix me up with some bushy-haired, middle-aged bore, and I feared this year would be no exception.

There are many scenes from Bridget Jones that were filmed in London. The first one I headed to was Bridget’s flat which is at the The Globe Tavern on Bedale Street and just a few minutes’ walk from London Bridge. It’s right by Borough Market that sells every conceivable food and that was used for the scene when she drags her Christmas tree back to her flat in the latest film Bridget Jones’ Baby. 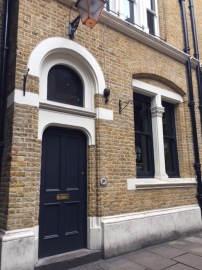 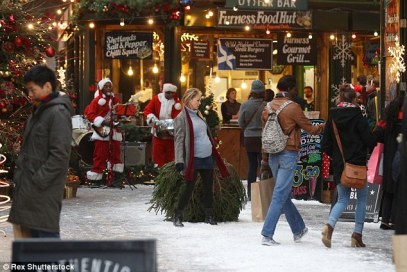 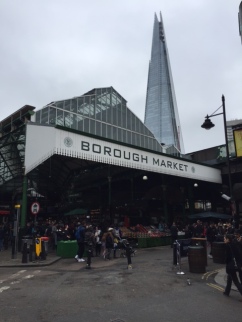 The fight scene in the Greek restaurant between Daniel (played by Hugh Grant) and Mark (played by Colin Firth) was actually unchoreographed. In a 2013 interview, Colin described how he thought:

Guys, the last fight we had was when we were 7 in a playground and whatever fight we have now is probably going to look exactly like that!

Hugh and Colin did all the fight scenes insurance issues prevented them from actually hurling themselves through the window of the restaurant! That was a time to call in the stuntmen. And where was this scene filmed? Just opposite Bridget’s flat on Bedale Street called ‘Bedales of Borough Market’, which is a wine merchants.

North of the River Thames close to the stunning Leadenhall Market and Sky Garden, you’ll find Royal Exchange Buildings on Cornhill. This is the final scene of the original film where Bridget thinks that she’s blown her chance of love with Mark and she goes chasing after him to explain everything. However, he comes out of a shop with a brand new diary suggesting a new diary means a new start. And, yes, this is the snowy scene where she’s forgotten to put on her skirt! But the scene was actually filmed in April which snow machines doing a fabulous job tricking us to believe that it really was Christmas!

One filming location outside of London that I’d love to go to is Snowshill  which is a beautiful village in the Cotswolds where Bridget and Mark meet for the first time at her mother’s annual turkey curry buffet where everything is cooked in miniature!

My mum, a strange creature from the time when gherkins were still the height of sophistication 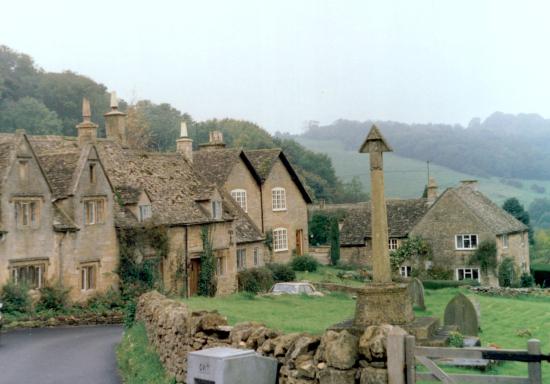 So, just a few scenes from Bridget Jones that I went to but tomorrow’s film? Sliding Doors