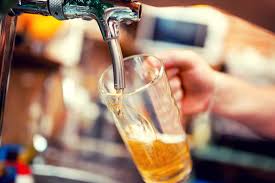 In the past week, I managed to tick off another challenge……pull a pint behind a bar. Just like the time in my 30s when I asked a policeman in the middle of Leicester Square, London if I could sit in the back of his police car, it just goes to show that people are often more than happy to help if you explain that you’d like to do something.

Last week, I was out for dinner with friends and got talking about my challenges. The restaurant was fairly quiet and when I read out to them about having never pulled a pint behind the bar, my friends and I though it seemed like the perfect opportunity to ask if I could and the waitress was more than happy for me to do it. My first attempt was rather funny as it appeared as if I had filled the pint glass with milk! So much head and really not a lot of beer! But my second attempt was far better after being shown how to pull a pint properly. So, yay, another one done!

Next week, I’m planning on seeing the Christmas Coca Cola lorry down in Brighton which I am just buzzing about!!!! Am very excited about that one and I’ve also emailed a group about doing some voluntary work with adults who have learning difficulties, Down Syndrome, etc. My plan is to do at least 50 hours and with the group meeting one evening a week, that’ll be me set up for the next 6 months or so. Still waiting about the ukulele lessons but, with 2017 nearly through, I feel as if I’ve made a good start. 2018 will hopefully see a bit of travel going on!